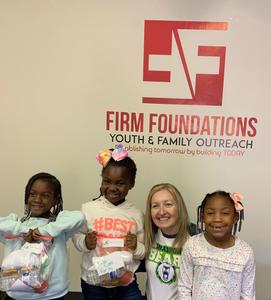 As you all know, Kierra has a big and caring heart. The other night while I was driving we approached a homeless person on the side of the street asking for food. As many people do, I did not respond to the person - especially with it being dark outside. However, Kierra who was eating in the backseat suddenly rolled her window down trying to give him her food. I'll have to admit, that I was not happy with her decision to roll down her window at night to a stranger - especially since he then began approaching her window. Of course, being the caring person that Kierra is, she was not happy with my decision of not letting her give him her food. After explaining to her about some safety precautions, I promised her that we would do something about it another day. So, now Kierra has planned a day (Kierra's Kare & Share Day) - a day that she and others will fix sandwiches and take them downtown to give to homeless people. She is asking that I share this invitation with others to come and help or support her as she does this.

On Monday, November 11th Kierra and several of her 1st-grade classmates along with members of the community came together to fill over 100 bags with sandwiches, crackers, applesauce, socks, and a positive handwritten note.  These bags were given to the homeless community in Charlotte. What an amazing project!  Thank you all for your servant's heart!