There has never been a more important time for us to come together as a community. As a school, we have a mission that we stand by daily. We are committed to educating the whole child, creating positive relationships in our student's lives, and helping to raise compassionate, caring children who have a passion for learning. We strive to create a space where we can come together to ensure that all of our students experience love and acceptance every day.

This is the Spirit of Bradford.

Overview of Black History classroom and school-wide activities and events!
Mrs. Pate's Kindergarten class is learning about a different historically important person in black history each week throughout February. For the week of 2.8.21, the students are learning about Ruby Bridges. 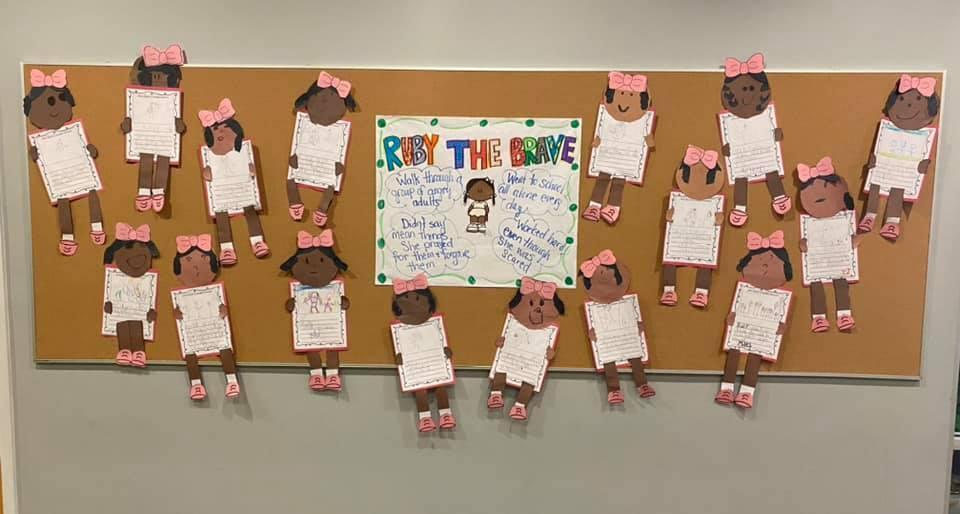 In 2nd Grade, we are teaching a lesson using the book Henry's Freedom Box by Ellen Levine.  We are also sharing read-alouds with the books The Story of Ruby Bridges by Robert Coles and Meet Danitra Brown by Nikki Grimes.

Mr. Lindsay 1st grade is also learning about a different person each day. Week 1 was inventors, week 2 is athletes, week 3 civil rights leaders, week 4 will be scientist/artist. All of these information sheets will be bound into a book and sent home on the 26th!

Mrs. Hawes 4th Grade: My class created an MLK Jr poster, and we shared different books
with the class.  We will also be learning about Black American inventors during our CKLA Eureka unit this month.

Mrs. Witt's 5th-grade remote students are featuring an influential African American each day! Students have been encouraged to email Mrs. Witt at least one person who has inspired them somehow. We read the biography together in class and have some discussion.

From Mrs. Witt, "It’s been neat hearing the suggestions from the students 😊 I have a dancer who suggested Misty Copeland, some basketball lovers suggested Kobe Bryant. Other suggestions have been MLK, Barak Obama, Harriet Tubman, Whitney Houston, Chadwick Boseman, etc."

Mrs. Schettler's K-5 General Music is learning about Jazz. They are concentrating on Black Musicians, specifically starting with Louis Armstrong, Ella Fitzgerald, and many more.

Ms. Davis, 7th-grade Art Students, will be creating neo-expressionist works of art inspired by Jean-Michel Basquiat’s techniques and combining those with the language of Maya Angelou’s poetry. Books: Life Doesn’t Frighten me; Poems: The Mask, Why the Caged Bird Sings, Alone – students will need to find their own poem to use that hits home for them the most. We will learn about freedom quilts- and create our own as a class using collage and construction paper. Students will need to explore their own backgrounds and culture and explain why some patterns are emphasized and their meaning.

Ms. Davis, 8th Grade Art Students, are using Wiley and Bearden to experiment if art can tell history. What it means to use art as commentary and to share personal experiences in society today// also emphasizing 2020 since the year will go in history books for future generations. What do we need to know about how students were coping with protests, the election, being out of school, COVID19, the California/Australia fires, media, storming the capitol, and so on. What types of things did we see? Etc.. Like Bearden, they will use collage, and like Wiley, they will need to make visual commentary on the year. This lesson is about how we can learn from our neighbors using visual art and symbols. We then will look at Kara Walker (the G-rated version) and contemporary art. We will be doing our own silhouettes to depict specific problems/historical events that students feel are worth looking at and/or finding a solution.

Mrs. Scruggs, MS Math Teacher, will be showing the movie Hidden Figures.  Once the students have watched the movie they will be working on math activities related to theories identified in the movie.

Mr. Fleming, 7th Grade Social Studies Teacher. My scholars are about to start their Black History Month project. Before we begin the project, they will learn the origin of Black History Month. They will begin presenting these on February 22-23.

Mrs. Davis, 8th Grade ELA Students, have been reading The Narrative of the Life of Fredrick Douglass. Douglass powerfully describes his experience as an enslaved person in the nineteenth-century American South. Along the way, he challenges his society's severe limitations on the idea that “all men are created equal.” Narrative of the Life of Frederick Douglass is a classic not only of anti-slavery writing but also of persuasive writing in general. In reading it, students will learn the ugly facts about the system of slavery, but they will also see a living example of how the power of language can change an entire culture. They will analyze Douglass’s text as a potent series of arguments against slavery, and they will encounter the personality of young Frederick as he moves toward personal liberation.

Students also participated in an Anti-Slavery Fair just like the abolitionist of the late 1800s. Students were assigned topics like #brutalization, #violence, #work, #hypocrisy, #literature, etc. I've attached a few of the speeches given by students.

Students also read Incidents in the Life of a Slave Girl by Harriet Jacobs to compare the experiences of Douglass and Jacobs, as well as sections of a Boy's War by Jim Murphy to better understand the context of the Civil War from the eyes of the children who fought in it (over 250,000 soldiers were under the age of 16). After reading each text, we will write an essay on: How does Douglass, in the Narrative of the Life of Frederick Douglass, try to change what his readers believe about what it means to be dedicated to the American idea that “All men are created equal”?

Mrs. Hanline in SS is covering what happens after the Civil War and the Civil Rights Movement then and now.

Blakeney Hanline, 8th Grade Social Studies Teacher
We are about a quarter of the way through our Civil Rights Movement Unit in 8th Grade Social Studies, which works out perfectly with Black History Month starting this week. Students are keeping a running Civil Rights Movement Timeline going in their notebooks starting with 1619 and the arrival of the first enslaved African People and will keep adding to it as we go.

We have been studying Jackie Robinson and the impact he had on the Civil Rights Movement and the U.S. this week. Students created mini-posters about him and the things he experienced. We’re finishing the week by watching the movie “42”. (I attached pictures of the mini-posters to this email.)

Last week we studied the bravery of the Tuskegee Airmen during WWII and the week before that students researched an impactful African American Hero from the 1800s. Students then created presentations about their hero and presented them in class through Zoom.

Coming up in Social Studies we will continue studying the Civil Rights Movement and students will be completing a project on a Civil Rights Activist from the 20th century. This will be a larger research project and will end with students presenting their project to the class.

From Ms. Engle, MS English Teacher "I'm really excited about what we are doing in Spanish class to celebrate because I think it's essential for students to be aware of the fact that black history isn't just celebrated in the USA! We will have a week and a half long lesson plan to learn about and celebrate notable Afro-Latinos in history. I've found that most students have no idea that someone can have both African and Hispanic heritage or that Afro-Latinos have faced discrimination and had civil rights movements in Latin American countries.

We start with a presentation + video on what it means to be Afro-Latino and the history of the Afro-Latino identity. We will read about a few notable Afro-Latinos in history (poets, actors, activists, etc.). Students will also look at a few modern-day famous examples of people they might not have realized were Afrolatino! (Carmelo Anthony, the famous basketball player, is one example!)

Here is the link: Me Gritaron Negra (They Called Me "Black Girl") https://www.youtube.com/watch?v=cHr8DTNRZdg&feature=emb_title

After going through the presentation, students will complete a week-long research project in which they will choose a notable Afrolatino figure to write a short research paper about. I will be providing students with an extensive list of figures to choose from, and we will go through the entire research and writing process together in class. Students will then summarize their paper to their classmates so we can learn about all sorts of notable people together!

Mr. Brady, Upper School World History Teacher.
My world history students are researching for a black abolitionist poster project and presentation. The presentations cap off an enlightenment and revolution unit. 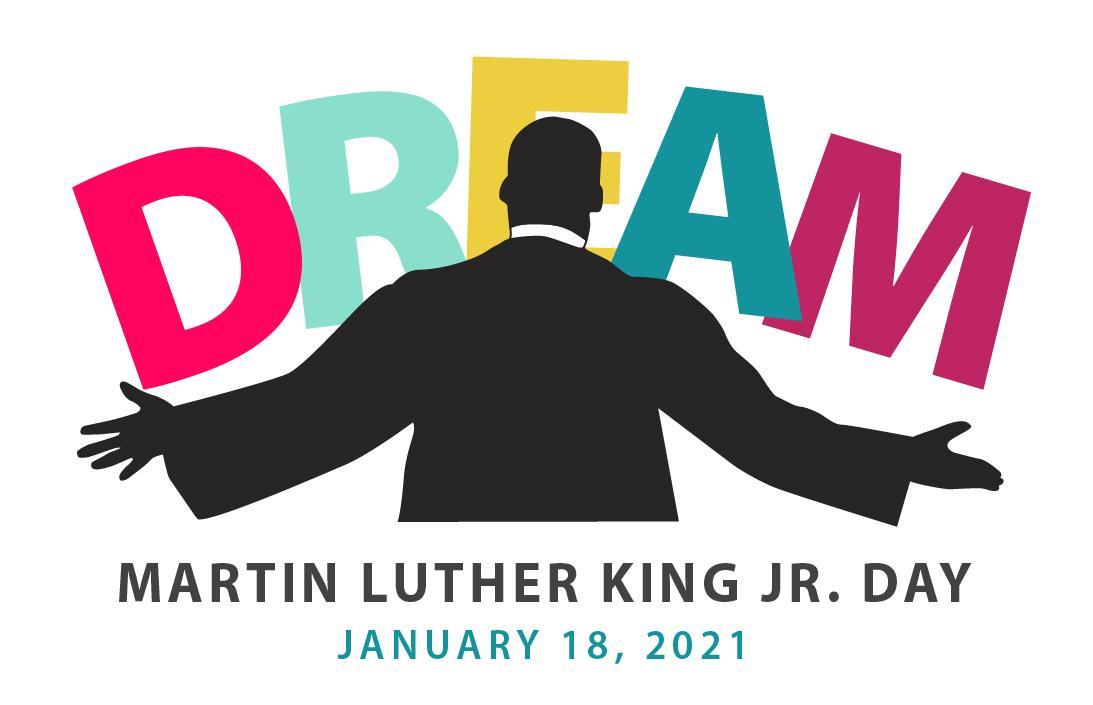 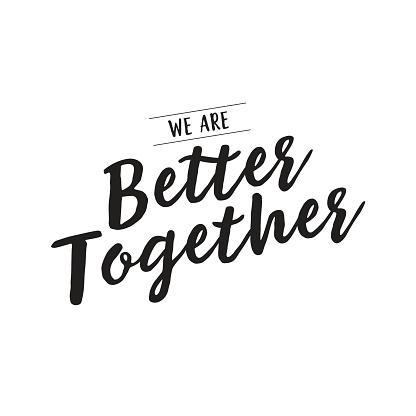 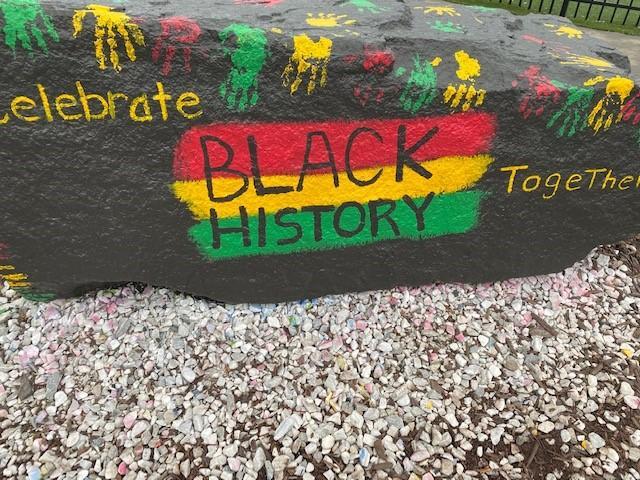 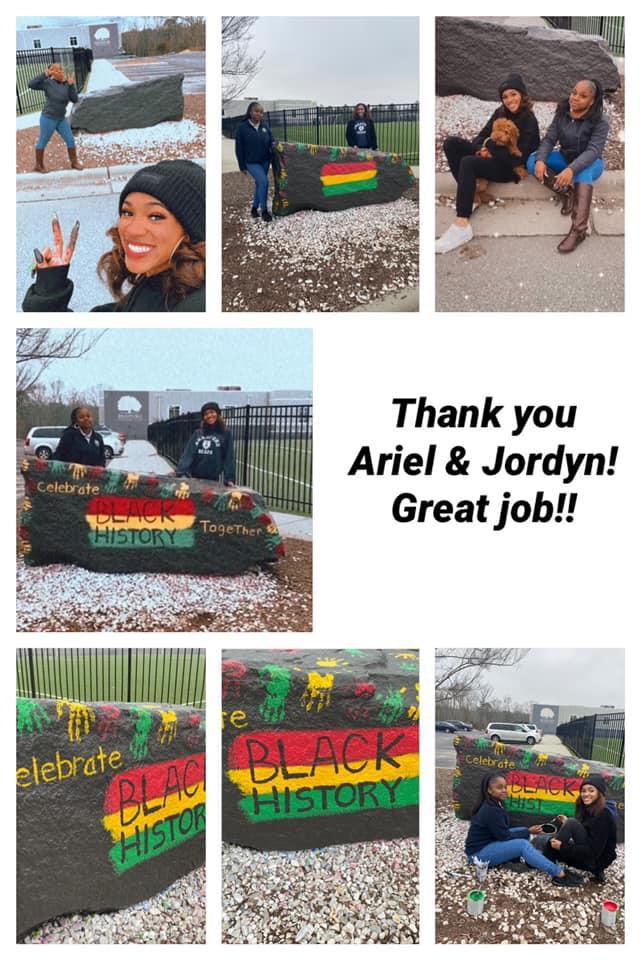 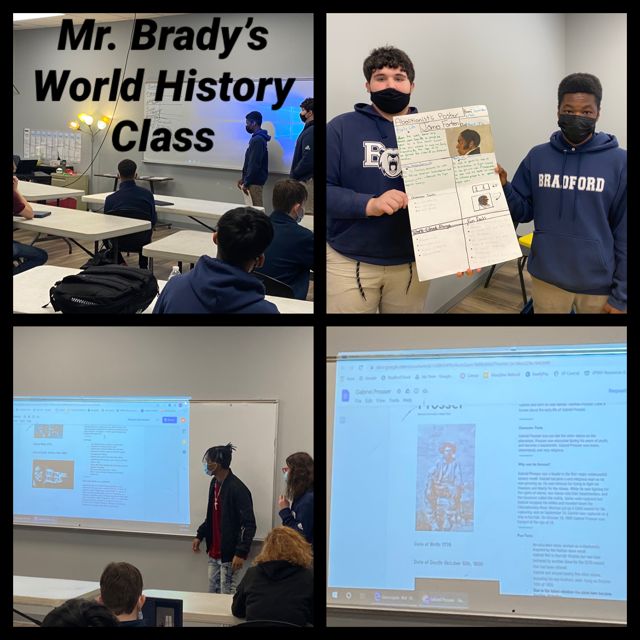